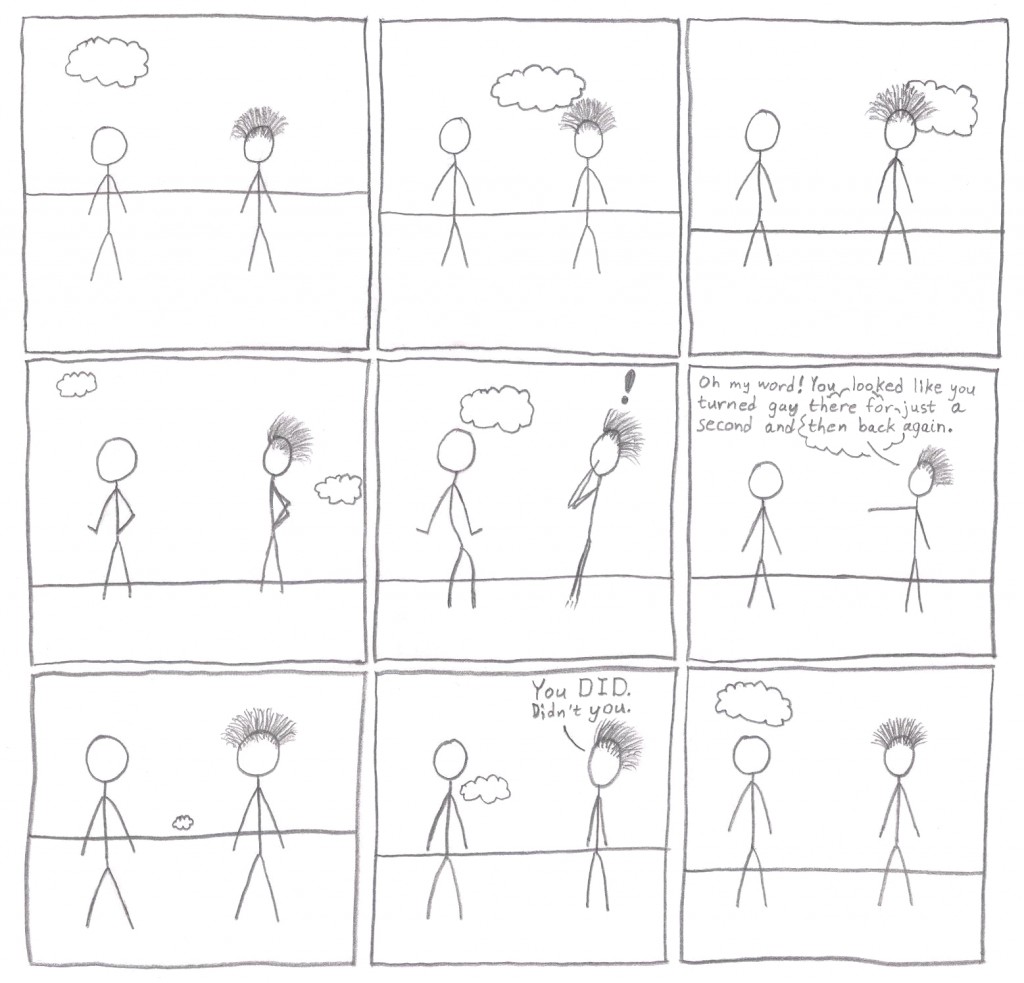 Did he or didn’t he?  I guess we’ll never know.

And by that of course I mean you readers of The Schtick who have just read today’s comic and are currently feeling gay (synonym: happy) as a result.  I worry a little bit about every one of my comics; that it is going to fall flat on its face.  Today’s is definitely no exception.  I’ve redrawn it 4 times (so 5 times total).  I almost never redraw a comic at all and actually never redraw any comic more than one time.  That sounded like a rule but it isn’t a rule.  It just hasn’t happened before.  The joke in this one makes me chuckle every time I think about it but on paper it just seemed to die right out.  I tried writing a lot more text to explain it.  I tried a lot more squares with nothing going on.  I tried throwing in extra unrelated action.  Nothing created more than a strained half smile in any of my forced reader tests.  Nobody has seen this final version before though.  At one point in time I thought it was perfect, as I do of all my comics.  Now though I’m right back to where I am with every other comic, worrying a little bit, which probably means its going to be ok.  I’ll get some positive response and I’ll get some negative response and both will surprise me a little bit because of their oppositeness.  (That’s a word isn’t it?  My spell checker doesn’t think so.)  That is all for today.  🙂

And by that I mean people who may or may not have been offended by today’s comic (synonym for those people: panzies).  Please don’t be offended for a second time.  My wife thinks you might have been offended once.  She doesn’t know about the second time yet.  I think you probably weren’t offended the first time but might have been offended the second time when I called you a panzy. How should I know though?  I didn’t mean any offense.  I never do.  If you were offended, however, it may surprise you to know that I’m not sorry.  Life is too short to worry about such things.  And as my subconscious mind used to always say silently to itself so nobody could hear, “being offended every once in a while builds character.”  That’s not to say of course that if I had known ahead of time that you would for sure be offended that I would still have created this comic and posted it.  I wouldn’t have.  I never offend on purpose as those who know me can attest to.  I hope that makes you feel better.  It probably won’t though.  That line of reasoning never works on my wife and I’ve tried it more than once for various offenses.  If it doesn’t work on her it stands to reason that it probably won’t work on those of you who, like her, are attracted to men, or on those of you who, like her, are actually women.

Hole complete.  And looking very nice too, if I do say so myself.  (I like to finish things once I’ve started.)