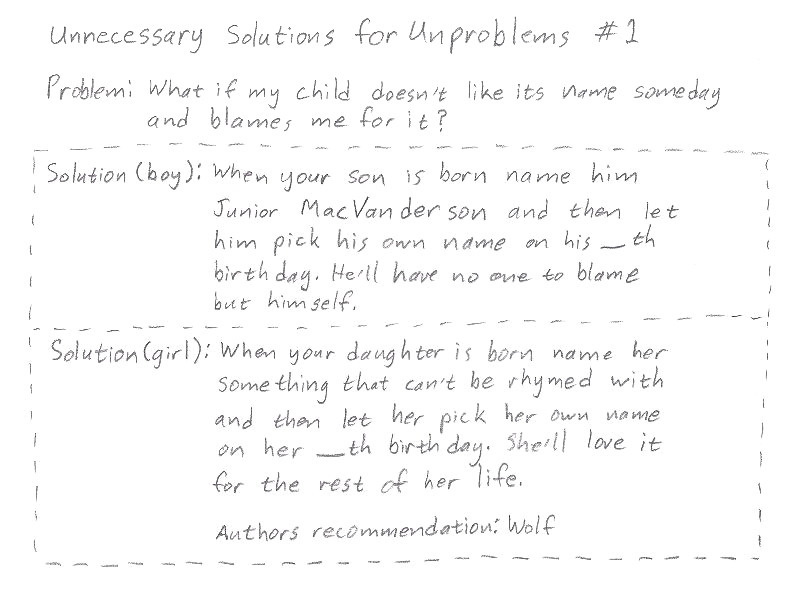 Apparently that is how you say “good afternoon” in Bosnian.  It isn’t exactly still afternoon right now but that is too good to pass up.

I want to wish my Father a better than happy Father’s Day.  Today’s comic is dedicated to new Father’s-to-be everywhere.

Kids are creative when it comes to making fun of someone’s name they don’t like.  You can save your kid some hassle by either giving them genes strong in the areas of fast growth, largeness of frame, quick wits, and social skills or alternately you can mitigate some of the potential damage by making your child’s name hard to rhyme with.  You can check out Wikipedia for a list of unrhymable words in the English language.  There is also a nice list of words with only obscure words that rhyme with them; which is nearly just as good.  Here are some interesting ones I ran across for a girl:

Circle – What she’ll keep you running in

Orange – Technically does rhyme with “Blorenge”, a hill in Wales, but I think you are probably safe with this one.

Music – Nice feminine implications but doesn’t actually sound very nice now that I think about it.  “Nice to meet you.  My name is George Major and this is my daughter, Music Major.”

Woman – the perfect name for a female in many ways but probably a bit premature for a child, though if you can tough it out until she reaches maturity this would be a great name for any woman.  Woman (your last name here). How does it sound?  Pretty awesome I bet.

There are others.  I’m sure you will come up with something lovely.

About the last three comics:

A few people were confused.  I once said to myself, “Wouldn’t it be funny if the man who is always wrong were to say, ‘Don’t worry. Its not the end of the World.'”  So I wrote it down with all of my other comic ideas.  Every time I go to make a comic I look through all my ideas until one pops out at me and I run with it.  I’ve passed that one over many times because that statement isn’t all that funny by itself.  I decided it needed a lead up.  Comic #41 is just a silly conversation.  Comic #42 is me trying to come up with questions that you could ask someone that it would be impossible to answer wrong.  Comic #43 is the joke that I wrote down as an idea so long ago except it still wasn’t all that funny by itself so I let my mind wander a bit and the mini stick man sitting on a finger happened.  Just in case you were wondering, it is a normal sized flower and finger with a mini-stick man and not a giant finger with a normal sized stick man.