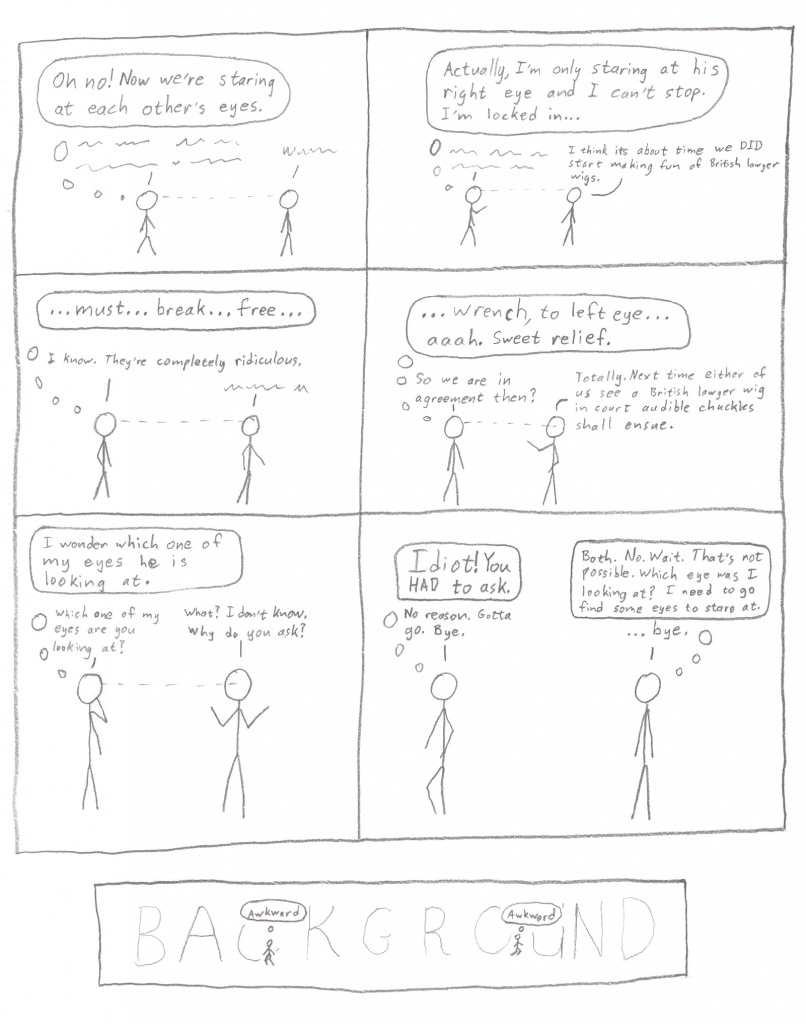 I’ve been thinking about eyes lately.  Eyes are things that I didn’t look at very closely for most of the beginning of my life.  My dad told me I was making a mistake and should be paying closer attention to eyes.  So I did.  That is the last I thought about it until a few weeks ago.

I was looking somebody in the eye when I noticed that I was really getting locked in on that eye.  Really focused.  I couldn’t move though because the person I was talking to was looking me in the eye too and they would notice for sure.  Then, I realized this was stupid. (I don’t actually have mental problems.  I just have things about me that could become mental problems if I was stupid enough to let them.  I’m relatively smart though, so, … no mental problems.)  Nobody cares if I switch eyes while they’re talking to me.  I don’t even think they actually can tell if I switch eyes or not.  So I did.  I wasn’t quite as comfortable after that though so I switched back.  Light bulb.  I have a default eye that I like to stare at on other people.  It is your right eye.  (That’s right, I’m talking to you.  I stare at your right eye when you and I are talking.  Think about that next time you see me.)  I immediately had to take a poll.

Default to other persons right eye: 9

Default to other persons left eye: 4

But that is only 13.  What could possibly be going on with those other 3 weirdos, you are asking yourself.  Well, nothing really, they just wouldn’t commit to any eye being a default eye and they think they constantly switch from eye to eye.  Hard to say for sure though because who actually thinks about these things until I ask them.  It was almost universal that people hadn’t really thought about their eye staring habits before.  I found a couple kindred spirits that have had similar thoughts though.

The most interesting thing I learned is that 3 of the aforementioned polled people, whether they had an eye that they were more comfortable staring at or not, generally would focus on a feature of the face other than the eye.  For example, eyebrows, bridge of the nose, lips, wrinkles (I made that one up, probably true though), or even a small puff of air a foot or two in front of the eyes at hand.  In case you are starting to think otherwise, I know these people to be non-shifty folks.  Trustworthy and whatnot.

So now I want to poll you too. 1. Which eye do you default to?  Four choices a. other person’s right b. left c. you switch back and forth constantly d. you focus on other parts of the face. 2. Are you right handed or left handed?

I’ll be adding this poll to this site eventually.  For now though feel free to poll everyone you know.  If you are not sure how to conduct this poll see below.  Also, if you run across any other variations on the 4 options listed above I would be very interested in hearing about those.  Thank you.

Helpful tip for you to use for the rest of your life: If you are having a conversation with somebody and you can’t think of anything to talk about this usually has interesting results, “Which one of my eyes are you looking at?”